View image in full height View image at half height
You are here:

200,000 visitors a year show: St. Stephen’s is an attraction! Tourists from the whole world pilgrim up St. Stephen’s Mount, to the glowing blue stained glass windows by the artist Marc Chagall. The reconstruction and restoration of the Gothic church, which was almost completely destroyed in the Second World War, also brought its revival.

Over one thousand years ago, in the year 990, Willigis, Archbishop of Mainz and Archchancellor of the Holy Roman Empire, endowed a collegiate foundation here and had the church built as the “Empire’s Place of Prayer”. The constructor of the cathedral was himself laid to rest in St. Stephen’s in 1011. The new Gothic building was erected between 1290 and 1335. It stands on the foundations of the basilica built in Ottonian-pre-Romanesque style around 990. When the (gun) Powder Tower located nearby blew up in 1857, St. Stephen’s was also badly damaged. The rich baroque decoration was removed during the reconstruction.

Today, the house of God presents itself as a clearly arranged hall church with a nave and two side aisles in which the Gothic vaults have not yet been restored. The walls are finished in white with the red sandstone of the supporting architectural parts forming an attractive contrast. The structure’s 66 metre high, spacious tower probably still dates back to Willigis’s church up to the level of the of the pointed arch frieze. A wide crack in the tower was already repaired in 1947. The dome and lantern were added again for the city’s two-thousandth anniversary in 1962.

Until 1911, a lookout still lived as fire-watcher in a specially furnished dwelling in the tower, high above the roofs; triplets were even once born here. This fire-watch in the city had existed since 1559.

St. Stephen’s is the only German church for which the Jewish artist Marc Chagall (1887 - 1985) created windows. Born in Russia, the artists spent the longest period of his life in France. Blue light shines through the stained glass into the interior of St. Stephen’s, and not only angels but other Biblical figures move apparently ethereally in this light.

“The colours address our vital consciousness directly, because they tell of optimism, hope and delight in life”, says Monsignor Klaus Mayer, who imparts Chagall’s work in mediations and books. He established contact with Chagall in 1973, and succeeded in persuading the “master of colour and the biblical message” to set a sign for Jewish-Christian attachment and international understanding in the east chancel. In 1978, the first Chagall window by the then 91-year-old artist was fitted. A further eight followed, six for the east chancel and three in the transept.

Marc Chagall, who became an honorary citizen of Mainz, but never got to know the city, completed his final window shortly before his death at the age of 97. Nineteen later and deliberately more modest windows in the side aisles by Charles Marq, from the Atelier Jacques Simon in Reims, serve to lead up to the masterpieces. Chagall worked together with Marq for 28 years.

Anyone who has seen the famous windows should not afterwards fail to take a walk around the most beautiful late-Gothic cloister in Rhineland-Palatinate. This was the place of burial of many of the 600 canons. Tombstones and the coats of arms of the capitular families recall their memory. The coats of arms are enriched by modern keystones donated by the federal and state governments, the bishopric and city of Mainz. Works of art, such as the enthroned God the Father from the 15th century, or the late Gothic sculpture of St. Anne, the Virgin and the Christ Child, should also not be overlooked. For some years in St. Stephen’s, children have been baptised in the original Gothic baptismal font from 1330 again. 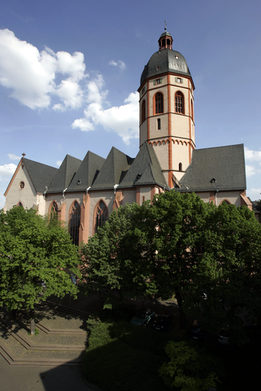